As I've said before, Sabah is one big melting pot of ethnicities, which makes for an interesting cultural calendar. Usually I'm restricted by work from driving off to various festivities, but this weekend it was the turn of the local tribe, and in addition, the festival was being organised and promoted by none other than the lovely Dr Othman, who owns the homestay where I live. The local people are part of the Dusun tribe - or the Kadazandusun, depending on who you speak to. The Kadazan and the Dusun are often lumped together, linguistically and culturally, and the only real difference is that the former live along the rivers, and the latter in the mountains. Most of my schools are entirely Dusun - although a few Malays and Chinese live in the town, once you get a few kilometres outside, it becomes very homogeneous.

So. The Kadazandusun. They're a lovely people with a rich cultural heritage. Unfortunately, because it was an entirely oral tradition, much of this heritage has been lost, and the few scraps they have left today are being frantically collated and rescued, a lot of it by my Dr Othman, who is not just an ex-MP for the district, but also a leader amongst the Dusun.

What we know: the Nunuk Ragang was a legendary and magnificent ficus tree, the centre of a civilisation that stretched across the northern half of Borneo. It appears in a number of stories across the many sub-ethnic Kadazandusun tribes, and is seen as the last time that they all formed one civilisation together, before branching off to build villages in far-flung corners of the rainforest. It was the foundation of their traditional beliefs, which were illustrated by the position of the tree at the meeting of three rivers - the point where the Kogibangan (Left) and Kawananan (Right) Rivers blended to form the Liwogu (Deep Calm) River. The belief system was based on a symbiosis between various opposites - life and death, light and darkness, seen and unseen, and of course, good and evil spirits. It also saw the importance of living in harmony with the environment, the two sides, human and environmental, both living, coming together to form a calmness of the soul. And they lived in and around a big tree. Stop me if you've heard this one before... perhaps James Cameron once paid a visit to this humble corner of the world? If so, there's one thing he forgot to include in his environmental lecture, the third of the sixteen Respectful Observances for the Dusun people: pantang kaparaian, or "respect for rice." Okay, so perhaps uniquely Asian then...

So we arrived at the site, my orang putih colleague and I, shaking hands left and right as usual, various strangers calling out to us, "Welcome to Sabah!" in smiley voices. We quickly located Dr Othman and greeted his group of distinguished colleagues (all of them known by the Malay honorific Datuk, or Sir), but he was so busy that we soon left him to it. The first part of the ceremony began soon afterward: the high priest and priestess arrived. Dressed in gorgeous traditional fabrics and headcoverings, and draped in silver jewellery, they posed for a few pictures with politicians and organisers, the centre of attention in this religious ceremony. 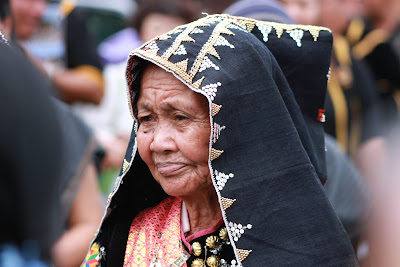 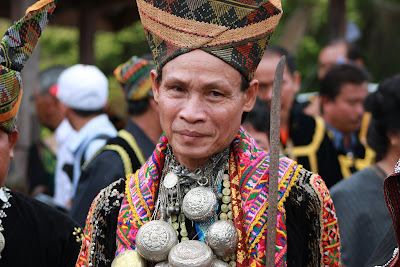 We left them to their paparazzi for a bit. Further on down the parade route that the priest and priestess would take were school groups and a few adults playing gongs and executing some pretty impressive dance moves.


A warrior stood by, laughing; when he saw me take aim with my camera he immediately struck his Serious Pose and waited for me to photograph him. I think about three pangolins probably died for his costume, which makes it my first sighting of the elusive and endangered Sunda pangolin... It was a very impressive costume, though.


I also managed to spot my first bird of paradise, which was nice.


These musicians weren't the only spectators - hundreds of people had walked over from the surrounding villages and towns, and even different provinces. They watched from the top of the monument, from down on the ground with us, and from in amongst the trees, wherever they could find a space.


The priest and priestess slowly moved up towards the monument. Every ten metres or so, they had to stop to listen to the gongs, or the drums, or the flutes, or to shake their bracelets. It was a very musical day (and I mean this sincerely - Sabahan people have an ear for a tune). One very talented little boy leapt around before them in leather and pangolin, bellowing and waving a machete and shield. 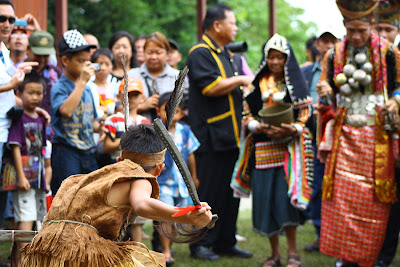 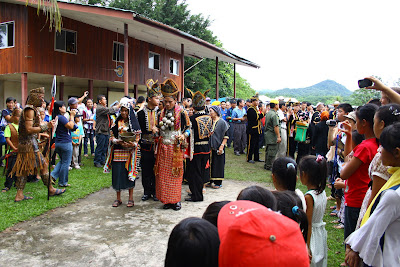 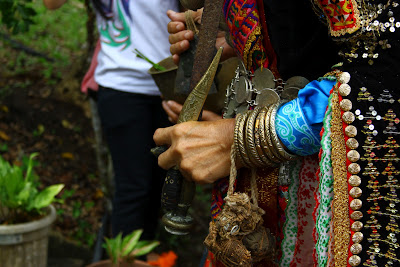 Inside the monument, which is a concrete mock-up of the legendary tree, the priest and priestess and their young initiates took turns singing to the tribal chief (who also happens to be the Deputy Chief Minister of all of Sabah). 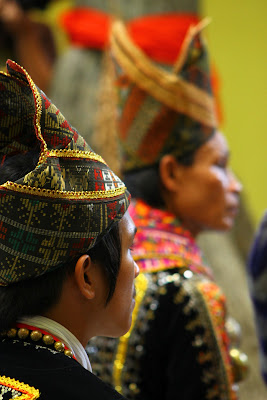 Of course then we had looooooots of photos with everyone of importance - this is Dr Othman (L) with the chief (R) and the local Member of Parliament in the middle. 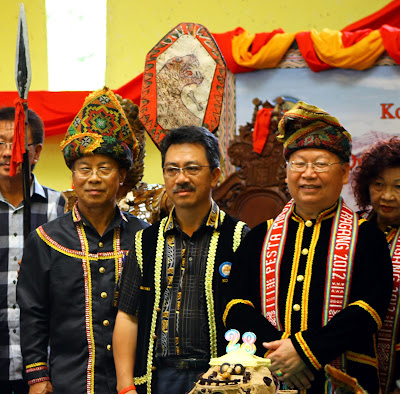 As we left, it being around 35 degrees, we just about managed to catch a deep blue glimpse of the distant Mount Kinabalu peeking through the clouds that usually develop over Borneo in the afternoon. It was a nice link between the two sacred places of the Kadazandusun culture - the source of life and shelter, and the place of the dead. More on that ghostly mountain coming soon... (shhh...) 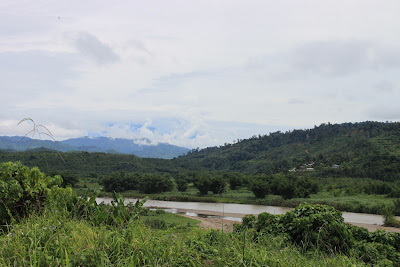